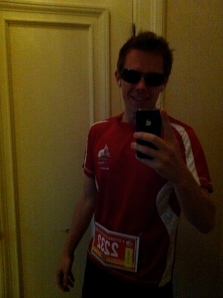 The title of this post is courtesy of some random sign that I saw as I ran the Ottawa Marathon on Sunday (which, by now I’m sure you know is 42.2 km).

To be honest, I really wish I had the time to pull out my camera while I was running to take photos. I didn’t because I was worried that changing anything during the run might affect my pace. Plus, I was rather busy what with all the running and such.

But good gravy there were so many things to photograph. And I’m not talking the scenery (although that was quite beautiful too). I’m talking about the signs-of-encouragement along the way. For example, there were the signs that read

“All this heavy breathing is turning me on,”
“Marathoners have great stamina. Call me,” and
“Marathoners do it longer.”

There were so many signs along the route that made me smile; I wish I could remember them all. Sadly, my focus was mainly on the run so I didn’t burn all of them to memory. Regardless, let me offer a whole-hearted thank you to those who came out with awesomely crazy signs to support all of us crazy enough to run the marathon. We really appreciated it.

Speaking of all those that came out, I was amazed at the number of people who lined the streets of the route to cheer us on (both with and without signage). The roar of the crowd was at times deafening – in a good way. And I have to say that the opportunity to high-five all the kids on the sidelines as I ran by was especially awesome. The boost this provided was so welcome and so awesome. In fact, with the roar of the crowd, all the high fiving, and the finish line in sight, I ended up with the most incredible runner’s high for the last kilometer. It was epic.

But I get a bit ahead of myself. While the race started officially at 7am, the prep clearly goes back several months. I won’t bore you with those details, but I will try to give you a sense of the event starting Sunday morning.

After making our way through athlete’s village, we wandered to our respective positions at the starting gate (I was in the yellow corral, Mark was in blue – I think). Standing in line for the race to begin, I quickly scanned the crowd. There were a mix of age groups, heights, weights, and shapes. Clearly, insanity wasn’t limited to men in my age group. The other thing that I took in, and this is something that I have felt at all races, is the sense of community. Chatting with neighbours, figuring out where people have come from, offering last-minute advice, calming nerves, etc. It’s quite amazing. Even more so, the electricity in the air as thousands of people anxiously await the gun to signal the start of 42.2km of long distance running. Yes, clearly we are insane. But I can’t deny that the running experience is like no other.

The run started off as all runs do; lots of bumping and positioning and moving about. Basically, I do my best just to get out-of-the-way of the people who are faster than me, and get by those that are slower. My strategy is always to find my way from open space to open space with as minimal interference to the runners around me. That, and I like to find the fittest (and usually taller) person in front of me – catch up to them, and then use them as a stepping stone to the next fittest person.

Anyway, the run was awesome. The first 10km came and went in no time (53 minutes). I was confident, comfortable, and energized. My breathing was slow, my heart rate was calm, and I felt completely relaxed. I spent some time taking in the sights, smelling the smells; all while listening to my running mix on my iPhone. Every kilometer or so, RunKeeperwould update me with my race pace, and overall things were great. My race pace remained consistently between 5:16 and 5

:34 per kilometer up to the 34th kilometer. Then things went a bit south.

Around the half way mark, I realized that my IT bands were beginning to feel a bit odd. And by odd, I could tell that they were soon going to require some attention. I hoped beyond hope that I could just keep running and maybe run through the oddness I was feeling. But over time, it kept growing. And growing. And growing. Until it was a full on scream. Specifically, my knees and my hips were yelling at me. Not because I was tired. Not because I was winded. And not because I was out of energy. In fact, quite the opposite was true. Regardless, when the IT bands speak, you have to eventually listen.

So around the 34km mark, I reluctantly pulled off the course to stretch a bit. Amazingly, there was no wall, I never doubted that I could complete the run, and I still felt completely energized and pumped. But I had to stretch. The hope was that a few minutes of stretching would allow the bands to chill out enough that I could finish the race without too much time loss.

Anyway, after stretching I picked up my run again. Of course, starting up after having stopped for a few minutes is difficult. Not mentally – at least not in this instance – but physically. My body just didn’t want to move. It felt clunky; as if my joints weren’t moving the way they were supposed to. The ligaments or muscles seemed to ignore their typical pathways, and instead chose to snap from one position to the other. Nothing was smooth. And that was a terribly odd and uncomfortable feeling. There was a moment where I wondered if I had actually injured myself significantly. Of course, I dashed that thought away pretty quickly. I had a race to run and I wasn’t going to stop at 34km.

And so I carried on. Because I’m clearly insane. And when I was able to get my body moving, it eventually got back to the old pace. That is, despite the stop I returned to my 5:30’ish pace. Sadly, my IT bands were not satisfied and again, around 36km, I had to stop. The same scene repeated itself at 38km, and 40km (if I recall correctly). But each time required longer durations of stretching. And each time also required a longer ‘restart’ to get my body back to moving the way it should.

Thankfully, the last 2km of the course were lined with hundreds, probably thousands of supporters. The boost that they gave was amazing. At that point, the runner’s high was so intense that I felt no pain whatsoever. I simply realized that I was so close that I just had to keep going. And I did. I just ran, comfortably and with a purpose. The end was in sight. I had almost run a marathon.

About 500 metres or so before the finish line, I saw Matt and Monique cheering me on from the sideline. This was just the added boost that I needed to push myself the last little bit to cross the finish line.

I’m still on a bit of a high. Every now and then I remember that I just ran a marathon and I smile. I’m so pumped right now, I feel like I could do anything.

Now I have to start training for my next mission: a Century Bike ride, a 35 day challenge of hot yoga, and another marathon. W00t! Wish me luck 🙂

This site uses Akismet to reduce spam. Learn how your comment data is processed.